Posted by xroadcop at 8:22 AM No comments:

When is this going to happen?

READ THIS, THEN CONTINUE TO BOTTOM:

With 33 dead, including the gunman, this was the deadliest mass shooting in US history. Other incidents, sometimes called 'spree killings', include:
October 1991 Previously, the worst mass shooting had been when George Hennard drove his pickup to Luby's cafeteria in Killeen, Texas, then shot dead 23 people and himself.

July 1984 Some 21 people were killed when a 41-year-old opened fire at a McDonald's restaurant in San Diego. He was shot by police.

August 1966 A gunman holed up in a clocktower at the University of Texas campus in Austin killed 15 people before being shot by police. Prior to yesterday, this was the worst campus shooting in US history.

August 1986 A former postal worker entered a post office in Oklahoma, and shot 14 workers before killing himself.

April 1999 The most notorious campus shooting of modern times: two students at Columbine high school in Littleton, Colorado, killed 12 students and a teacher before killing themselves.

March 2005 A student at Red Lake high school in Minnesota killed five students, a teacher, a security guard, and then himself. Before school he had shot dead his grandfather and grandfather's companion.

July 1993 A businessman, 55, entered a law office in San Francisco and shot dead eight people, then himself.

February 1988 An ex-employee returned to his laboratory in Sunnyvale, California, and killed seven people, and injured three - including a woman he had been stalking.

January 2006 A woman killed seven people then herself at her former postal workplace in Goleta, California.

March 2006 A loner shot six people at party in Seattle, then himself.

For a long time, certain people have been irritated to the point where they felt that the only solution was to kill the person causing that irritation. In those cases, legally the shooter was not justified, and either went to prison or committed suicide at the time of the shooting.

Now comes our immoral leader who seems on a marathon trip to see if he can break every law and christian commandment. He ignores the Constitution, and greedy, selfish people either look the other way, or actively support him in his quest for total control in this nation.

Right now, members of Congress appear to be those enablers. A part of the proposed "Health Care PLan" is to tell selected groups (Anyone over 65, the handicapped, those with long term disabling maladies) --YOU ARE GOING TO DIE.
Now, we all know modern US Medicine works miracles, keeps people alive, and adds years to people's lives. So, it is possible to cure or maintain people.

But the Enablers are telling people, YOU ARE GOING TO DIE--because we will NOT pay the cost of your care.

MY QUESTION: When is this going to happen?

When is some son, husband,wife, parent --Who has been told your beloved IS GOING TO DIE BECAUSE WE REFUSE TO PAY FOR IT---going to go into some Congress Person's Office and shoot them, and use as a defense--defending the life of another.

Because if this Obamacare package passes, there will be people essentially who will be "Put to Death"

This is a new one for the Liberal Radicals. It also illustrates thier raging hypocrisy.
They have, since the 70's, claimed it was a RIGHT for a mother to execute her unborn or just born. Simultaneously, they expressed outrage at Abu-Gharib prison. (Prisoners "Tortured" by having to put panties on their heads and pile up in a haep naked)
They were aghast that someone would give murderers and serial killers the same treatment as those killers have given their victims. They champion Mumia Abu-Jamal,who stood over a wounded police officer and executed him, and did sit-ins to protest Stanley ''Tookie" Williams execution.

Yet, they cling to the ability to kill babies, and now the elderly.
Posted by xroadcop at 10:38 AM No comments: 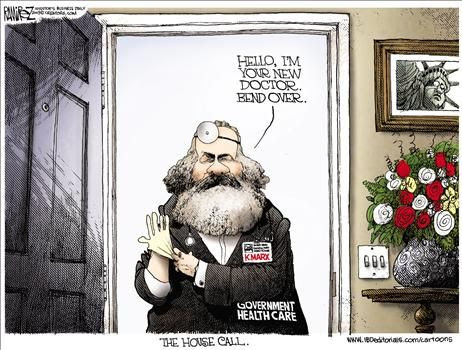 It is my conclusion that the two biggest, most glaring aspects of Liberals are Fantasy and Hypocrisy.
An example of Fantasy is that we should raise the minimum wage to $10, and everyone would be erarning a good income
REALITY:
Employers can not afford to pay $10 an hour, so a lot of people get laid off

HYPOCRISY
Here you have people who are foamy-mouthed about Abu-Gharib, about the death penalty for serial killers, but they almost demand that every woman should have the Right to kill her baby at birth or before.
Add to that:
As "Jack Dunphy" writes (Below), they are wanting the power to give older people a Death Sentence because it is uneconomical to keep them alive

What’s the Price of Tomorrow?
Filed under: General — Jack Dunphy @ 11:47 am
[Guest post by Jack Dunphy]

A dear friend recently passed away at the age of 91. He had been in fairly good health until the last year of his life, and he spent his final six months shuttling between emergency rooms, intensive care units, and a convalescent hospital as he battled pneumonia and a MRSA infection. He was even given a pacemaker a few months before he died.

One can envision that had the health-care regime now under consideration in Congress already been in place, my friend would have been denied much of the treatment he received in those final six months. What sense does it make, some would argue, to commit so many costly resources to the treatment of a 91-year-old man? Why not offer medication to keep him comfortable and then allow nature to take its course, freeing those health-care dollars for some more vital patient?

From a strictly economic perspective, why indeed?

My friend’s wife survived him and lives on today at age 90. She still drives but prefers not to if there is someone around to take her on errands, so while her husband was in the hospital, my wife and I would sometimes drive her to visit him. Though confined to his bed and in some discomfort, he was for the most part alert and responsive. The singular joy of his day was the visit with his wife, when she would sit at the edge of his bed and rub his back and tell him of the latest news from relatives and friends. They had been married for 62 years, so there was also a lot of talk about the old times. As they wrapped up their visits, she would tell him she loved him and that she would see him tomorrow. “Love you too,” he would answer, “see you tomorrow.” Finally, as all of ours will, those tomorrows came to an end.

If this monstrosity of a health-care bill becomes law, who will determine, and by what measure will they determine it, that we have consumed our allotment of medical care and are now obliged, for the sake of a healthier nation, to go away and die?

I’m certain my friend and his wife held those last few see-you-tomorrow moments as priceless. Who will put a price on ours?