Another industry put into Damned if you do... 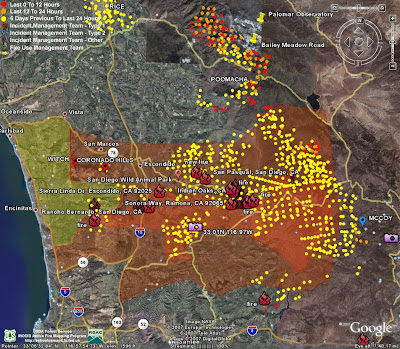 
http://www.latimes.com/news/local/la-me-power-shutoff11-2009sep11,0,2542238.story
Reporting from San Diego - The Public Utilities Commission on Thursday rejected a plan by San Diego Gas & Electric Co. to turn off power to back-country areas during times of high winds and low humidity to avoid a repeat of the disastrous fires that ripped through the county in 2007.

The commissioners, in a 4-1 vote, said the company had not shown that its plan would decrease the chances of fire.

Commission member Rachelle Chong said she was influenced by opposition from the San Diego County Sheriff's Department, the county Office of Emergency Services and the California Department of Forestry and Fire Protection.

Any new plan, if the company wants the commission's approval, should have "more support and confidence from these first-responders," Chong said at the hearing in San Francisco.

Opponents said the shut-off plan would endanger back-country residents by leaving them without electricity to pump water onto small fires. About 17 areas with 60,000 customers were targeted for shutoffs when humidity was low and winds hit a sustained rate of 35 mph or gusts up to 50 mph.

Three fires that destroyed 1,500 homes and burned more than 200,000 acres in October 2007 were blamed on sparking wires knocked to the ground by high Santa Ana winds.

Opponents, including the Board of Supervisors, said the utility was more interested in limiting its liability than in protecting back-country residents. The company has agreed to pay $740 million to insurance companies to cover payments to their policyholders for the 2007 fires.

Despite the rejection, the company still has the authority to turn off power in emergency situations, Commissioner John Bohn said. The difference, he said, was that without the PUC's backing, the company does not have decreased liability for fire damages.

"There are risks associated with living in the backcountry as opposed to downtown San Diego," Bohn said.

Commissioner Dian M. Grueneich urged the company to redouble its efforts to replace wooden poles with metal, trim vegetation near overhead lines and generally "harden" its system against high winds and fire.

"The shut-off plan has always been a diversion from the real problem: For years, SDG&E has failed to enact known safety measures that would prevent wildfire caused by its infrastructure," said Dianne Jacob, chairwoman of the county Board of Supervisors.

In a statement, Debra L. Reed, president and chief executive of the utility, said the company was disappointed at the decision but pleased that the PUC commended some of its fire-prevention efforts and reaffirmed the company's position that it retains the authority to shut off power during emergencies.

"Our goal always has been to reduce the potential for any more catastrophic fires in our region," Reed said, "and we will continue to work with key stakeholders in the community to achieve this goal."

SO, another service is placed into the "Damned if you do, Damned if you don't" press.
IF you leave the power on, it can start fires--and the Tort Liability attorneys will sue you.

IF you turn off the power (Now fires will not start), you can not fight a fire started by another source of ignition (No power--no water pump) --and the Tort Liability attorneys will sue you.
Posted by xroadcop at 8:03 PM No comments:

Posted by xroadcop at 5:06 AM No comments: