Posted by xroadcop at 3:05 PM No comments:

THE CRIMINAL CONSPIRACY OF GLOBAL WARMING

This is what they did - these climate "scientists" on whose unsupported word the world's classe politique proposes to set up an unelected global government this December in Copenhagen.

An unelected global government with vast and unprecedented powers to control all formerly free markets, to tax wealthy nations and all of their financial transactions, to regulate the economic and environmental affairs of all nations, and to confiscate and extinguish all patent and intellectual property rights.

The tiny, close-knit clique of climate scientists who invented and now drive the "global warming" fraud - for fraud is what we now know it to be - tampered with temperature data so assiduously that, on the recent admission of one of them, land temperatures since 1980 have risen twice as fast as ocean temperatures.

One of the thousands of emails recently circulated by a whistleblower at the University of East Anglia, where one of the world's four global-temperature datasets is compiled, reveals that data were altered so as to prevent a recent decline in temperature from showing in the record. In fact, there has been no statistically significant "global warming" for 15 years - and there has been rapid and significant cooling for nine years.

Now we know why: As a revealing 15,000-line document from the computer division at the Climate Research Unit shows, the programs and data are a hopeless, tangled mess. In effect, the global temperature trends have simply been made up.

Unfortunately, the British researchers have been acting closely in league with their U.S. counterparts who compile the other terrestrial temperature dataset - the GISS/NCDC dataset. That dataset too contains numerous biases intended artificially to inflate the natural warming of the 20th century.

Finally, these huckstering snake-oil salesmen and "global warming" profiteers - for that is what they are - have written to each other encouraging the destruction of data that had been lawfully requested under the Freedom of Information Act in the UK by scientists who wanted to check whether their global temperature record had been properly compiled.

And that procurement of data destruction, as they are about to find out to their cost, is a criminal offense. They are not merely bad scientists - they are crooks. And crooks who have perpetrated their crimes at the expense of British and U.S. taxpayers.

I am angry, and so should you be.

What have the mainstream news media said about the Climategate affair? Remarkably little . The few who have brought themselves to comment, through gritted teeth, have said that all of this is a storm in a teacup, and that their friends in the University of East Anglia and elsewhere in the climatological community are good people, really.

No, they're not. They're criminals. With Professor Fred Singer, who founded the U.S. Satellite Weather Service, I have reported them to the UK's Information Commissioner, with a request that he investigate their offenses and, if thought fit, prosecute.

But I won't be holding my breath: In the police state that Britain has now sadly become, with supine news media largely owned and controlled by the government, the establishment tends to look after its own.

At our expense, and at the expense of the truth.

Christopher Monckton is a British Lord (3rd Viscount Monckton of Brenchley), the former policy advisor to Prime Minister Margaret Thatcher, and the inventor of The Eternity Puzzle.
Posted by xroadcop at 5:47 AM No comments:

Posted by xroadcop at 2:42 PM No comments:

Posted by xroadcop at 1:36 PM No comments:

Ken Gladney... and me 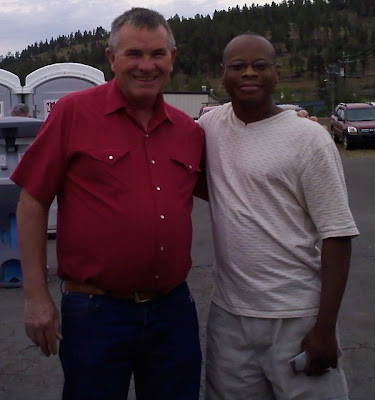 I Am Kenneth Gladney
by Kenneth Gladney
I am a man with no chips on his shoulders and no axes to grind. I just want to be an accepted member of society. I want to make my own way in the world. A free man in a free country. On August 6, 2009 my manhood and my civil rights were reversed back to the 1960’s. I was working as a vendor at a townhall event on Aging, hosted by Rep. Russ Carnahan, in St. Louis. I was selling my buttons and flags.

A group of people with purple t-shirts were leaving the rally. As the group walked past me, I offered one of the gentlemen a Gadsen flag and a button. The man turned and looked at my board and said, “who in the fuck is selling this shit?”

I replied “I am Sir, would you like a flag or a button?“

He shouted at me, “What kind of nigger are you?!” Then, he grabbed my board, so I quickly grabbed it back, then the man punched me in the face and charged at me . I put my hands up to block the second blow from the large man, when two other people from that group grabbed me and threw me to the ground and started punching and kicking me. I was kicked in the head and in the back, legs and buttocks. Then a white woman ran up to me while I was on the ground and began kicking me in my head as well. A few people came to my rescue for which I am forever grateful.

It has been more than three months since Kenneth Gladney was viciously attacked by SEIU employees. The assault wasn’t an accident, but a deliberate attempt to intimidate and silence tea party activists and town hall protesters. The morning of the Gladney assault, the White House presented to Senate Democrats a ‘battle plan’ to quell the protests. The White House advised Democrats “punch back twice as hard.” Gladney was the first casualty.

The Gladney beating took place at a forum on ‘Aging’, sponsored by Rep. Russ Carnahan. Carnahan had been caught flat-footed by earlier protests. This time he was more prepared; the day before the forum, Sara Howard took over as his communications director. Ms. Howard is a veteran leftist activist, holding senior positions with SEIU.

SEIU and partisan hacks like Media Matters have tried to spin away the Gladney beating. They would have you believe a 130 lb diabetic, recovering luekemia patient, picked a fight with men almost twice his size. The police report puts an end to that lie.
Posted by xroadcop at 12:28 PM No comments:


Unless you have been locked in Isolation, you know that a Muslim Army doctor went to work at Ft Hood yesterday, took two handguns, and killed 13 people and shot 38 more before he was brought down.

It became a question (In view of the Photo)--How did Hasan get on Base?

Someone had to have let him on.

I think I have the explanation:
It is not that Hasan's face was familiar. It was because he had Muslim garb on.

Our guardians have been whipped over the head so long with PC that the person who let him on did not challenge him.

The Flying Imams Win
And the rest of us lose.
(Even in a case of National Security)

So, that guard or person who allowed Hasan on will be skewered probably both civilly and criminally. 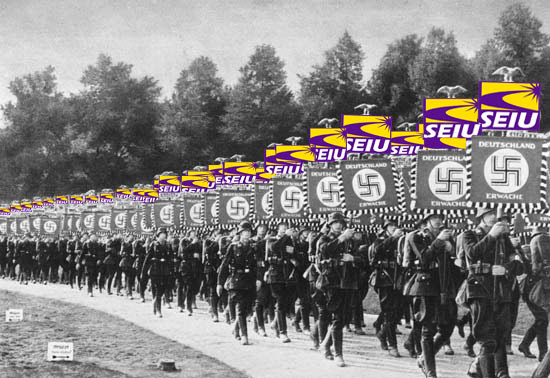 
Long after purple shirt-wearing SEIU goons beat up conservative activist Kenneth Gladney outside a Missouri healthcare town hall meeting, not much has happened.

the incident happened August 6th. Charges were filed. Gladney went to the hospital. Immediately, the Democrats brought in a high-powered attorney to defend the SEIU thugs who were charged with assault and it just kind of disappeared.

Flynn noted that the case has “disappeared within the jurisdictions of those individuals who are part of Buffy Wicks’s truth squad.”

Flynn is referring to Wicks, now deputy director of the White House Office of Public Engagement. As the leader of the Obama campaign in Missouri, Wicks organized an “Obama truth squad.” Flynn said she organized at the Obama campaign headquarters a press conference of law enforcement officials, prosecuting attorneys, strict attorneys at the campaign headquarters who issued a warning that they would prosecute rival campaigns for any what they saw as misleading statements from their campaign.

Wicks also helped to oversee the infamous National Endowment for the Arts teleconference in August in which the Obama administration openly encouraged artists to produce pro-Obama art as political propaganda.

Naturally, the left has responded with vicious attacks on the victim, a diminutive black man with diabetes. Perhaps in the eyes of leftists Gladney hasn’t learned his “place” in society.

Watertiger at firedoglake calls Gladney “Joe the Dumber” and describes him as a “teabagging wingnut who tripped and fell while getting in the face of an SEIU member.”

Wndycty at Democratic Underground calls Gladney a “fraud” and a “fool.”

TBogg mocked Gladney and his injuries, calling him a “Teabagging Drama Queen,” and adding, “If the teabagging people weren’t such rage-filled imbeciles they would be the most adorable slow children on earth.”

Bronte17 at the far left hate site Daily Kos refers to Gladney as a “‘Don’t Tread on Me’ dork” and as ” a mouthy dork in a dark tan polo.” (That sounds a lot like “uppity” black, doesn’t it?) The blogger also suggests Gladney is suing SEIU because it has deep pockets. “[H]mmm… wonder if they think union money is easy pickin’?”

Oliver Willis, who works for the George Soros-backed slime factory Media Matters for America, inverts the perpetrator-victim relationship calling Gladney “the black conservative who is the current poster boy for the thug right.” Willis can’t get the sequence right on his blog’s tagline either, “Like Kryptonite To Stupid.”

Wonkette derided Gladney as “the biggest whore in history. Like 100 times more whorish than Joe the Plumber and the world’s entire collection of actual street-walking prostitutes combined.” [emphasis in original]

Through many years of watching, I have concluded that Liberals have two prominent aspects: Fantasy and Hypocrisy.

Here we have the Hypocrisy.

Remember after Rodney King how they all clamored for the prosecution of the LAPD officers? Remember how gutless prosecutors put those LAPD officers on trial for “Assault under color of Authority”, even though California Law says:

Any peace officer who has reasonable cause to believe that
the person to be arrested has committed a public offense may use
reasonable force to effect the arrest, to prevent escape or to
overcome resistance.
SEC Section 835a , Calif Penal Code

REMEMBER, when a jury of their peers found the LAPD officers “Not Guilty:, the Kool-Aid drinkers of South Los Angeles rioted?

REMEMBER, Race Baiters confronting George H W Bush, who pandered to them and ordered the FBI to work a Civil Rights case against the Officers for “Violating Rodney King’s Rights”, and had them sent to prison?
Posted by xroadcop at 11:02 AM No comments: