RODNEY KING-- The start of a Template 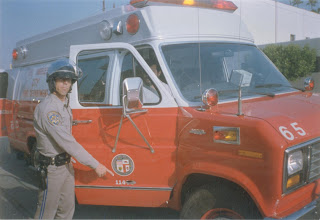 CHP Officer Klaus Groeger points to a bullet hole in the ambulance that he just escorted on a run during the Rodney King Riots.

Today, Rodney King, was found dead in his swimming pool.


King had long struggled with drugs and alcohol. He called himself a recovering addict but had not stopped drinking, and possessed a doctor's clearance for medical marijuana. King last year appeared on VH1’s "Celebrity Rehab," trying to tackle his fight with alcoholism.
King was drunk and unarmed when he was pulled over for speeding by Los Angeles Police Department officers and beaten.
The incident was captured on video by a civilian bystander, and the recording became an instant international sensation. Four of the officers were tried for excessive force. Their acquittal on April 29, 1992, touched off one of the worst urban riots in U.S. history.
"It felt like I was an inch from death," he said, describing what it was like to be struck by batons and stung by Tasers.
A jury acquitted the four police officers in the beating of King, unleashing an onslaught of pent-up anger. There were 54 riot-related deaths and nearly $1 billion in property damage as the seams of the city blew apart.

This was the beginning of the enforcement of Political Correctness by Special Interest Groups, also known as "Minorities".

A husband/wife California Highway Patrol unit noticed the car Rodney was driving because it had expired tabs, meaning the registration was not up to date. The team attempted to stop Rodney, intending to write a "Fix-it" ticket. Rodney was intoxicated on PCP. (YEAH, I know. You are going to say" But his tests came back negative". However, as another CHP Officer, I was a Drug Recognition Expert -DRE- certified by the National Highway Transportation Administration. I had also had an experience with several on PCP, one who took 13 Law Enforcers to take him down, basically by Gang Tackling him. )

Rodney knew if he stopped, they would notice that, which was a violation of his Parole

http://law2.umkc.edu/faculty/projects/ftrials/lapd/kingarrests.html
King's Trouble with the Law Prior to His Beating
The Arrest of Rodney King on March 3, 1991
King's Trouble with the Law After March 3, 1991
At the time, ALL law enforcers were instructed NOT to wrestle subjects appearing to be on PCP. The only approved method to subdue was the PR-24 baton.
After the Los Angeles District Attorney was goaded into prosecuting the officers filmed, they were tried. But, at the same time, Rodney King was NOT indicted.
The Special Interests, not content with a finding of a judge and jury, cornered GHW Bush when he came to town to start his re-election campaign. To pacify them, GHW Bush promised to set the FBI after the Officers, which he did. They were charged with "Violation of Rodney King's CIVIL RIGHTS" which is a catch-all charge, kind of like "Conduct Unbecoming", but this one carries a prison sentence.
The damage did not stop there. The Husband Wife team were given Written Reprimands for not timely informing their Supervisor--A Sergeant-- of the event. Their Sergeant was given Days Off for "Not initiating an administrative Inquiry" Their Lieutenant was interrogated, had a hear attack and medically retired. Their Captain also got Days Off for "Not initiating an Administrative Inquiry" . New rules came down from CHP HQ. One was that, if you, the CHP Officer saw a member of an allied agency (Another Police Dept) using brutality, you the Officer were to inform that Law Enforcer that he/she was being brutal, then, at the soonest opportunity, inform your immediate superior of what you had observed. (At  which time, you would be also required to document this in a Memo)
To me view, this was a step toward electing Barack Obama.
You see, in both cases.the general public and the Media both ignored all the sins of King and Obama, and focused only on their race. Race gave them both a pass.
Posted by xroadcop at 6:47 PM 4 comments: